Sikorsky Aircraft Corp., a subsidiary of United Technologies Corp., has begun full system testing of the U.S. Marine Corps’ CH-53K heavy lift helicopter with all seven main rotor blades and four tail rotor blades attached for the first time to a non-flying prototype called the Ground Test Vehicle (GTV). Powered “Light-Off” with rotor blades spinning follows a “Bare Head” (without blades) test phase of the GTV aircraft’s systems powered by its three GE 7,500 horsepower class engines, and begins a rigorous two-year test program of the rotor blades, transmission, engines, and all subsystems while the GTV is anchored to the ground.
“This is another key milestone in our building block approach to maturing the aircraft system,” said Mike Torok, Sikorsky’s CH-53K Program vice president, of the April 17 event. “The aircraft is now fully configured to proceed to the next series of system integration tests that will further validate the aircraft systems, such as rotors, drive, electrical, hydraulic, avionics and flight controls – all leading to operational acceptance testing that will clear the flight aircraft for flight operations. The preliminary results maintain our confidence in meeting first flight of the initial flight test helicopter in late 2014.”
The GTV will play a key role for Sikorsky and the U.S. Marine Corps during hundreds of hours of powered ground tests as the CH-53K team prepares for first flight and the subsequent three-year flight test program. By accumulating operational experience ahead of the four flight test aircraft — currently in final assembly — the GTV can measure and verify the ability of the drive system, transmissions and engines to fly the CH-53K helicopter safely and efficiently across multiple flight scenarios up to its 88,000-pound (39,916 kg) maximum gross weight with an external load.
During the next 250 hours of operation, the GTV will continue to assess the helicopter’s subsystems and the structural integrity and whirl characteristics of the rotors, blades and drive train.
The first of the four flight test helicopters — known as Engineering Development Models — is scheduled to take to the skies in late 2014. During the three-year flight test program, each flight test aircraft is expected to accumulate approximately 500 flight test hours. To ensure safety of flight, the GTV will continue to accumulate hundreds of operational endurance hours ahead of the flight aircraft.
The Naval Air Systems Command gave the go-ahead for the powered tests in December following closure of actions from an October Test Readiness Review and the completion of sub-system qualification testing.
“This joint CH-53K team has prepared well for this important day,” said Col. Robert Pridgen, U.S. Marine Corps program manager for heavy lift helicopters. “Discipline, hard work and some really smart folks have gotten us to this point. Looking forward, it’ll take more of the same as our confidence grows with respect to dynamic and system level performance of the Marine Corps’ next heavy lift platform. This is a great start leading us to first flight later this year.”
Latest HeliTrader Listings 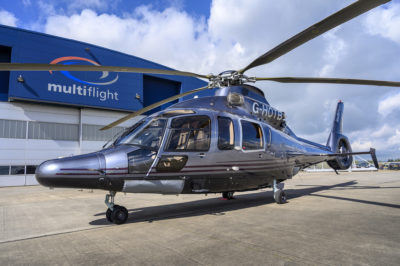