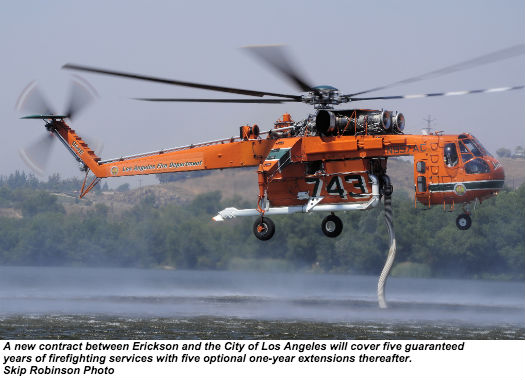 Erickson Incorporated, a leading global provider of aviation services, has announced a new five-year contract with the City of Los Angeles for the provision of aerial firefighting services. The greater Los Angeles area, one of the most populous and high-value regions in the U.S., often faces high temperatures and an arid climate during the summer that can lead to fires.
“We have tremendous respect for the expert firefighting authorities in the greater Los Angeles area and their devotion to keeping the City and its people safe from fires,” said Udo Rieder, chief executive officer of Erickson. “We are proud to provide continued support to these courageous firefighting crews and their crucial missions through our aerial firefighting efforts.”
The new contract includes five guaranteed years of service with five optional one-year extensions thereafter, as well as a 150-day per year minimum availability, up from 90 days in 2013. The contract represents the next chapter of Erickson’s 14-year presence in the Southern California region, including its fire suppression agreements with Los Angeles County and San Diego Gas and Electric.
Erickson will provide one S-64 helicopter equipped with the company’s proprietary 2,650-gallon fire suppression system, a detachable water tank with multiple refill options and eight coverage levels for targeted fire suppression. The Los Angeles Fire Department Air Operations Center at Van Nuys Airport will serve as the staging area for the helitanker, which will be available for fire suppression efforts at all times during the contractual service periods, which began Aug. 7, 2014.
“The Los Angeles City Fire Department is pleased to continue working with Erickson, as both our department and our residents value the company’s elite aerial fire suppression services,” said Los Angeles Fire Department Chief Ralph Terrazas.
“Together, our two organizations help save lives and resources when time is of the essence,” Chief Terrazas added.
Erickson employs the world’s most qualified pilots, maintenance personnel and support teams necessary to aid in flight operations and safety procedures. Services offered by Erickson’s medium- and light-lift helicopters include passenger transport, oil and seismic exploration support, search and rescue, aerial spray application, firefighting, long-line lift operations, and emergency medical evacuation at some of the most challenging and isolated places on Earth.
News from the Web