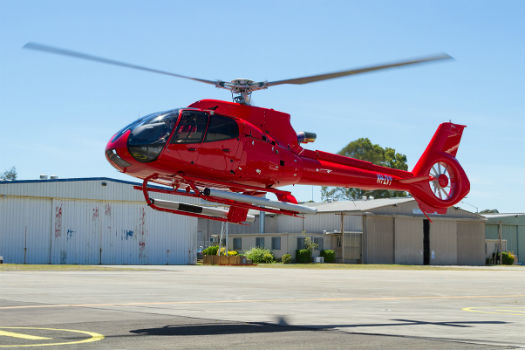 Airbus Helicopters is continuing its long-established tradition of introducing the latest initiatives in rotorcraft technology to the Australian aviation scene.

Since it first appeared in Australia on a demonstration tour last December, the newest addition to the Airbus Family of popular high-performance, lightweight, single-engine helicopters, the EC130T2, has already been taken up by four local Australian customers.

The T2 variant is a technologically advanced version of the EC130B4, the world’s best-selling helicopter in its class. Nautilus Aviation in Far North Queensland has acquired the latest version in Australia and will operate the aircraft as part of its charter, tourism and commercial fleet.

The EC130T2 variant incorporates a sophisticated package of state-of-the-art technologies that reinforce the Family’s reputation as the quietest helicopters on the market. The T2 variant is an advanced version of the EC130B4, the world’s best-selling helicopter in its class.

Its roomy, modular cabin can accommodate one pilot and up to seven passengers, and its expansive windows and high visibility makes it well suited to the needs of business or private aviation, as well as tourism and charter missions. In fact, business travellers can enjoy a very restful journey, thanks to the EC130T2’s very low internal sound levels, exceptional visibility and improved air ventilation, distribution and demisting.

The helicopter’s quietness is achieved by utilizing an enclosed Fenestron tail rotor and an automatic variable rotor speed control system which, together, produce significantly reduced external sound levels while boosting payload, range and speed, a major plus when operating over noise-sensitive urban areas.

Said Jens Goennemann, managing director for Airbus Group Australia Pacific: “The first T2 model only arrived in Australia at Christmas, so we are delighted that the local market has moved quickly to acquire four of the type to date, recognizing that they offer the latest in helicopter technology, enhanced mission capability and flexibility”.

More than 70 percent of the EC130T2’s airframe structure has been modified from its predecessor EC130B4 model – the world’s best-selling, high-performance, single-engine helicopter. But the latest model features a more powerful Arriel 2D turboshaft engine, an upgraded main gearbox and active vibration control system, along with FADEC and VEMD.

Other enhancements include a complete redesign of the cabin interior structure to provide a fully flat floor, an updated cockpit to enhance the aircraft-pilot interface, new energy-absorbing seats to improve weight and balance for passenger loading, a crashworthy fuel tank and increased maintenance accessibility for electrical and air-conditioning systems.

Together, this package of improvements provides the new look EC130T2 with an impressive boost in performance, such as a higher maximum gross takeoff weight of 2,500 kg for internal loads and 3,050 kg for slung cargo, and up to 10 knots increase in speed.