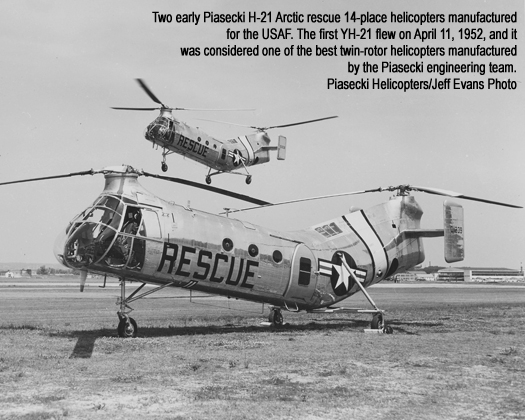 During the initial days of practical helicopter flight in the 1940s, the first Sikorsky and Bell helicopters were only capable of carrying two to three passengers in their cramped fuselages; there was little room for carrying cargo. The majority of the helicopters were also underpowered, somewhat difficult to fly and not that reliable. All that, however, was about to change as a driven young engineer named Frank Piasecki was poised to enter the fledgling helicopter industry in a big way.

Early rotary-wing aviation pioneer and inventor Frank Nicholas Piasecki, the only son of Polish immigrants Nicodem and Emelia, was born on Oct. 24, 1919, in Philadelphia, Pa. Growing up during the Golden Age of Flight, Piasecki received his first ride in an airplane when he was only seven years old, and became obsessed with aviation. But it wasn’t until 10 years later, in 1936, when he got a ride in a Kellett KD-1 autogyro with early rotorcraft pilot Lou Leavitt, that the course of his life really took hold and his desire to create his own aircraft designs was born.

In addition to his own talent and ambition, luck played a key role in Piasecki’s early entry into the aviation world. Specifically, Philadelphia and the Delaware Valley area of eastern Pennsylvania had a flourishing autogyro industry in the 1920s and 30s, and later was a big part of the helicopter industry in the United States. Appropriately, Piasecki worked for a number of local aviation companies — the Kellett Autogiro Co., Platt-LePage Aircraft Co., Aero Service Corp., and the Edward G. Budd Manufacturing Co.’s aircraft division — both during his high school and university days, and just after graduation.

While at Platt-LePage, Piasecki was not only working on the lateral-rotor XR-1 helicopter program, but on his own designs within the P-V (Piasecki-Venzie) Engineering Forum, which he had formed with Harold Venzie, Donald Meyers, Walter Swartz, Elliot Daland, Ken Meenen and Frank Kozloski, while still at university. This group, which would incorporate in 1943, would eventually become what is known today as the rotorcraft division of the Boeing Co.

One of the group’s first projects was the PV-1 helicopter. This early concept called for a single-rotor helicopter with a tapering tail cone and vectoring air to counteract torque, instead of a tail rotor. The idea was before its time and proved difficult for the young operation to build based on its resources and the technology of the day, so it was put on hold.

The PV-2 single-seat demonstrator, with its dynamically balanced main rotor blades and rigid tail rotor, turned out to be much more successful. And, when Piasecki unintentionally lifted the experimental helicopter, registered as NX-37061, into the air on April 11, 1943, during run-up tests, the PV-2 became the second helicopter to successfully fly in the U.S., after the Sikorsky VS-300. 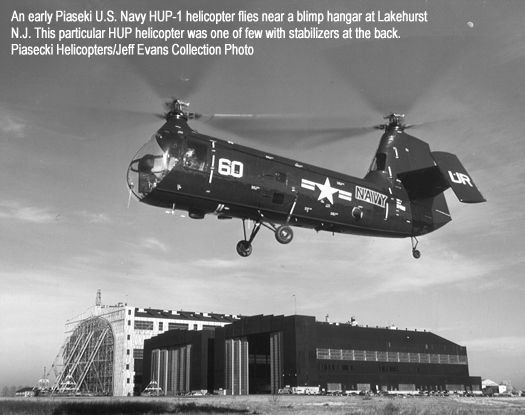 Although not a trained helicopter pilot at the time, Piasecki continued flight-testing the PV-2, gradually mastering the fully controllable helicopter. Of course, the goal, all along, was to show off the successful demonstrator to interested parties, particularly the military — Piasecki had envisioned a much larger helicopter that could transport military troops and cargo.

In fact, P-V’s engineers were already looking at the design of bigger helicopters, which, as luck would have it, tied in nicely with the U.S. Navy’s requirements. The Navy had been slow to accept helicopters and the few it had experimented with had not fit its needs. Piasecki would have to demonstrate his salesmanship and visionary skills to win over the Navy brass.

On Oct. 20, 1943, 23-year-old Frank Piasecki successfully demonstrated his small PV-2 helicopter at Washington, D.C.’s National Airport in front of an enthusiastic crowd of military and government officials. The Navy, in particular, turned out to be very impressed with the PV-2, which allowed Piasecki to approach the service with his vision of creating not just a larger helicopter, but one with a very different rotor set-up.

Piasecki’s vision was a radically new helicopter concept based on the engineering studies carried out by the P-V Engineering Forum. He proposed a tandem-rotor-configuration transport helicopter, with the rotors spinning opposite to each other. Significantly larger than any other helicopter flying at the time, it would be capable of carrying an unheard of 10 passengers.

After wind-tunnel testing proved the concept was viable, on Jan. 1, 1944, the P-V Engineering Forum received a contract from the U.S. Navy to proceed with development.

After 13 long months of toil by the six partners, the PV-3 — Navy XHRP-X, fore-and-aft twin-rotor, proof-of-concept, 10-passenger helicopter was flown on March 7, 1945. The 5,000-pound, tubular-steel-structured aircraft was powered by a Wright/Continental R-975 radial engine producing some 450 horsepower. As flight tests continued, P-V was already designing the first production model, designated the XHRP-1, for the U.S. Navy — not bad for a tiny, novice Pennsylvania firm with a 25-year-old president.

Unfortunately, with very little available capital to fund its projects, the young company re-organized as the Piasecki Helicopter Corp. in 1946, with wealthy financiers Laurance Rockefeller and Felix du Pont Jr. obtaining controlling interest (which, ironically, would later lead to Piasecki being pushed out of his own company).

The new company soon received another Navy contract, for a smaller six-place utility helicopter designated the XHJP-1 (later changed to the HUP series, and known as the H-25 in the U.S. Army) with overlapping, tandem rotor blades. Before long, the innovative little company would become one of the most successful of the era.

After two preproduction XHRP-1s, each fitted with a 600-h.p. Pratt & Whitney R-1340 radial engine, were developed and successfully tested, the Navy ordered 20 production HRP-1 “Rescuer” helicopters. The 47-foot-long helicopter’s cruising speed was 74 miles per hour and it could carry two crewmembers plus eight passengers.

By 1949, the Navy had received nine HRP-1s, the U.S. Marine Corps (USMC) eight and the U.S. Coast Guard (USCG) three. Nicknamed the “Flying Banana” due to its shape, the HRP-1 was a major breakthrough for vertical flight, and for these three services.

The USMC used its HRP-1s to develop tactics for vertical assaults, learning how to move troops and artillery. U.S. Navy HRP-1s were used to carry out anti-submarine warfare exercises (airborne minesweeping and dipping sonar). And the USCG used its Rescuer helicopters to pioneer long-range helicopter rescues — the first of which occurred on Dec. 31, 1948.

The next variant of the HRP-1, the HRP-2, featured an all-metal fuselage and side-by-side crew seating. While an improvement over the HRP-1’s fabric fuselage and tandem seating, it didn’t have the power to suit the Navy and USMC’s growing requirements. In the end, only five were built, with all of them going to the USCG.

A more powerful version of the HRP-2, the H-21, with a 1,425-h.p. Wright R-1820 radial engine was soon developed and became a success with both the U.S. Army and Air Force, as well as several foreign militaries. Over 700 of the series were eventually built.

Meanwhile, at the slightly smaller end of the spectrum, the first HUP-1 “Retriever” utility helicopters were delivered to the Navy in 1949. Among the multiple subsequent versions, the HUP-2 probably stood out most — it came with an autopilot, had a hatch underneath the fuselage to allow for hover reference during hoisting, and had a hoist switch on the cyclic to allow the pilot to operate the hoist if needed. In all, 339 HUP/H-25 variants were delivered by 1954 to the U.S. Army and Navy, the French navy, and the Royal Canadian Navy.

The final major helicopter design born from the Frank Piasecki era at Piasecki Helicopter Corp. was the H-16 “Transporter.” It was the largest helicopter in the world in its day; its 78-foot fuselage could carry up to 40 passengers or 32 litters. The YH-16 prototype had two 1,650-h.p. Pratt & Whitney radial engines, while the upgraded YH-16A version was fitted with two Allison 1,800-h.p. turbine engines, which helped push the helicopter to an unofficial speed record of 166 m.p.h in 1956. Unfortunately, the YH-16A prototype broke apart and crashed in December 1956, ending the U.S. Air Force program it was being tested for, and ending Piasecki’s plans for an even larger, more powerful and more innovative version.

In 1955, after losing a battle for control of Piasecki Helicopter Corp., Frank Piasecki left the business he had built and put his life into. Things had gotten so bad in his battle with upper management and their backers (including, primarily, Laurance Rockefeller), he had even been barred from the engineering department. (The company soon changed its name to the Vertol Aircraft Corp., and a few years later was acquired outright by Boeing.)

Undaunted by his ousting, Piasecki and group of former employees founded a new research and development company called the Piasecki Aircraft Corp. (PiAC). Its focus on the advancement of rotary-wing aircraft and vertical-takeoff-and-landing concepts led to a number of unique designs over the years, including aerial jeeps (AirGeeps); the Sea-Bat heli-drone; a multiple-helicopter, heavy-lift demonstrator called the Heli-Stat; and a series of high-speed, compound helicopters known as the 16H-1 and 16H-3, which have more recently taken the form of a vectored-thrust-ducted-propeller aircraft called the X-49A “SpeedHawk” (see p.62, Vertical, Feb-Mar 2011).

Piasecki also had time for life outside of business, including getting married in 1958 and having seven children. Then there were his various charitable endeavours and hobbies, including music, dance and photography. But aviation design and inventions, of course, were still central to his focus and life.

In the end, before he passed away in 2008, Piasecki had received 24 patents for his pioneering helicopter work, and numerous awards and honors, including many aviation-specific recognitions, such as:

• Receiving the Lawrence B. Sperry Award from the Institute of the Aeronautical Sciences in 1950;

• Being named Engineer of the Year by the Pennsylvania Society of Professional Engineers in 1967;

• Receiving the Spirit of St. Louis Medal from the American Society of Mechanical Engineers in 1983;

• Being awarded the U.S. Presidential National Medal of Technology, for his contribution to vertical-lift aircraft, in 1986;

• Receiving the Wesley L. McDonald Elder Statesman of Aviation Award from the National Aeronautic Association in 1987; and

• Being honored with the Smithsonian National Air and Space Museum Lifetime Achievement Trophy in 2005.

Today, his second company, PiAC continues his legacy of rotary-wing research programs, under the guidance of two of his sons.

Piasecki’s first company, meanwhile, has continued to gain ever-lasting fame under Boeing’s auspices and through a variety of tandem-rotor, heavy-lift helicopter designs — including the Model 107 and 234, and CH-47 Chinook — that derived from his pioneering early work. And, while none of the family are part of the rotorcraft side of Boeing, one of his daughters is a VP with Boeing’s commercial airplanes division, ever furthering the family’s connection to a legacy of aviation innovation.