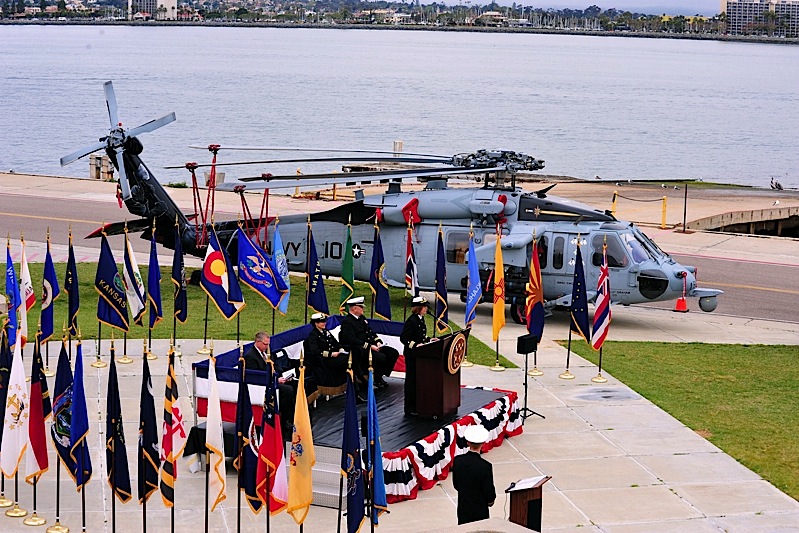 HSC-4 commanding officer Cmdr. Tamara Graham addresses the audience during the transition ceremony.
The historic United States Navy Helicopter Anti-Submarine Squadron (HS-4), famous for retrieving the Apollo astronauts from their capsules in the Pacific, has been renamed the Helicopter Sea Combat Squadron (HSC-4), receiving an expanded mission and new aircraft.
The MH-60S Sea Hawk replaced the squadrons Sikorsky SH-60Fs and HH-60H Seahawks in a March 29 transition ceremony, during which HSC-4 received secondary missions of fleet support and utility missions, including vertical replenishment, combat search and rescue, anti-surface warfare and special operations support and medevac.
At the ceremony, HSC-4s commanding officer, Cmdr. Tamara Graham, spoke of the units history and its future as an integral part of the U.S. Navys fleet operations. Capt. Shoshana Chatfield, commodore of Helicopter Sea Combat Wing, Pacific Fleet, and retired Capt. Michael Fuqua, a former commanding officer of HS-4, also gave speeches. “With this ceremony the legendary ‘Black Knights’ will embark on a new path, and with any decision of the future there will be uncertainties, but one thing that is clear is that the future is bright,” said Fuqua.
The superb work of aviation artist Shayne Meder was also on display during the ceremony. Meder, a civilian who donates her time to paint spectacular and historical artwork on the tails of Naval Aircraft, had painted the tail of a new MH-60S from HSC-4, which was displayed beside a SH-60F painted in HS-4 markings.
Established in 1952 and commissioned at U.S. Naval Auxiliary Landing Field, Imperial Beach, Calif., HS-4 was one of the first navy helicopter squadrons. Equipped with the piston-powered Sikorsky H04S-1, it became the first anti-submarine warfare (ASW) helicopter squadron of the U.S. Navy to deploy aboard an aircraft carrier. The squadron then converted to the larger and more powerful Sikorsky HSS-1 Seabat (S-58) in 1956 and deployed aboard the USS Boxer. In 1961, it became the first ASW squadron in Naval Air Forces Pacific to achieve around-the-clock day and night ASW capability, earning HS-4 the “Black Knights” title.
In 1964 the squadron converted to the highly capable twin turbine Sikorsky SH-3A Sea King Helicopter. In 1966, while operating in the Gulf of Tonkin in the Southeast Asia combat zone, HS-4 pilots and aircrew rescued 24 downed airmen while under heavy fire. These rescues ended up being a record for an ASW squadron during a single deployment.
In some of the squadrons best known operations, from late 1968 through the spring of 1970, the Black Knights and their SH-3 helicopters pioneered techniques for the Apollo capsule recoveries. Because of this experience, HS-4 was chosen for five Apollo recovery missions: 8, 10, 11, 12 and 13. After the first recovery was made by “Helicopter 66, it was decided to use the same helicopter for all subsequent Apollo recovery missions. For public relations reasons, even though aircraft 66 was designated 740 after the Apollo 11 mission, it was repainted 66 before any future recovery.
During 1991, HS-4 converted to the SH-60F and HH-60H and let the dependable SH-3 go after 27 years service. Since that time, the SH-60F and HH-60H have participated in many deployments and in support of operations in both Iraq and Afghanistan.
HS-4s best known recent accomplishment was in support of operation Tomodachi after the Japanese earthquake and tsunami on March 11, 2011. The squadron, aboard the USS Ronald Reagan, was able to arrive off the coast of Japan within hours of the disaster and begin helicopter operations. Over many missions from the ship to the Japanese mainland, the helicopters were able to deliver over 440,000 pounds of relief supplies.