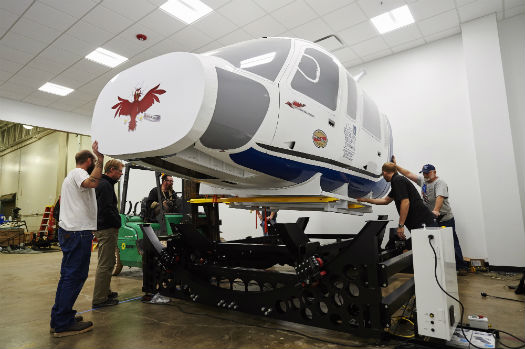 Case Western Reserve University students will soon train in a simulator built inside the fuselage of an actual helicopter. Roger Mastroianni Photos

The helicopter will feature some of the most advanced medical equipment with authentic aerial views projected within the windows and movement that mimics changing altitudes and weather conditions throughout the flight.

The helicopter simulator is one of only two in the world dedicated to training health care professionals, according to Celeste Alfes, DNP, MSN, RN, assistant professor and director of the Learning Resource Center at the school of nursing. The other is in Germany.

The simulator will allow acute care nurse practitioner flight students to learn the challenges of patient care of critically ill and injured patients being transported—sometimes from remote locations and difficult terrain, said Alfes.

The simulator is made from a retired Sikorsky S-76 helicopter fuselage and has a 10-by-7-foot passenger space that provides room for five occupants: the patient, up to three student flight nurses and an instructor. The students and instructor will work on a “high fidelity” patient simulator inside the fuselage while also being subjected to the movement, noise, temperature, vibration and altitude that can affect a patient’s vital signs and other health conditions.

The 800-pound capacity allows students to be trained with the same health-care equipment used in actual critical care transport helicopters. The simulator is an exact replica of what the students will eventually fly in while treating patients later in their studies. The fuselage will be equipped with mock laser rotors, developed by Case Western Reserve biomedical engineering majors, so students and their patients can learn to safely enter and exit the helicopter.

“The aircraft has inherent risks when operating in and around it, and these risks can be safely mitigated when proper techniques are applied consistently,” said Stephanie Steiner, the director of the Dorothy Ebersbach Center program and an experienced flight nurse practitioner with the Cleveland Clinic critical care transport team.

When not used to train students, the simulator may also be used to train military personnel for pre-deployment, those in the air medical industry and EMS first responders, Alfes said. 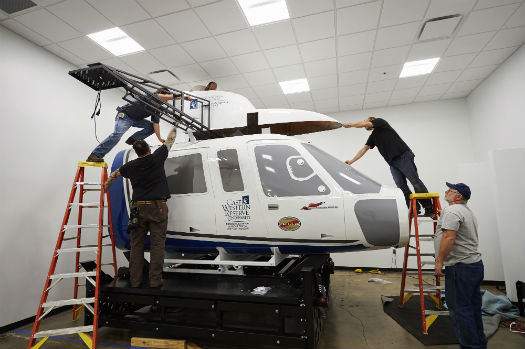 The helicopter simulator is one of only two in the world dedicated to training health care professionals.

Alfes described how the simulator was acquired and built in the recent Clinical Simulation in Nursing journal article, “Taking Simulation to New Heights: Designing a Flight Simulation Center.”

The center envisioned having a training simulator since its inception in 2002. But only recently did all the parts, pieces and funding align to make it possible, Alfes said.

The estate of Dorothy Ebersbach, which endowed the program with a $5-million gift, made a second gift to the program of around $500,000.

The $5,000 fuselage was purchased from H. P. Aviation, a helicopter graveyard in Oldsmar, Fla. The EMS interior, which coincidentally turned out to be part of a retired MetroHealth Medical Center life flight helicopter, was acquired from Arrow Aviation in Lafayette, La., for $10,000.

About seven students are currently enrolled in the ACNP Flight Nursing Program.