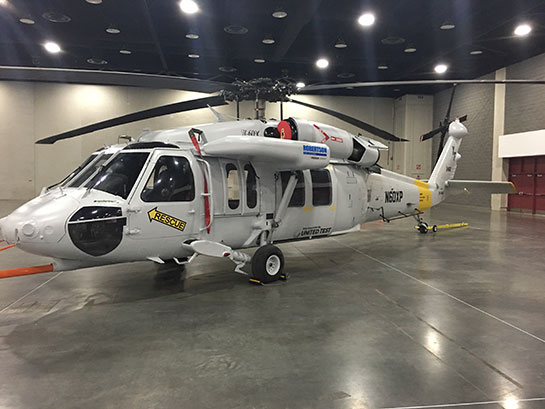 BHI Squared has announced completion and delivery of its fourth Type-Certificated, Sikorsky UH-60A ‘Commercial Hawk,’ available for firefighting and special operations. BHI Squared Photo
BHI² (BHI Squared) Helicopters has announced completion and delivery of its fourth Type-Certificated, Sikorsky UH-60A ‘Commercial Hawk’ or ‘C-Hawk’ helicopter, available for firefighting and special operations.
This fourth commercially-approved ‘C-Hawk’ is being displayed during the 2016 Heli-Expo in Louisville, Ky. March 1-3, at Booth 12636 and Static Area space 1-3, coinciding with release of the new BHI² (BHI Squared) Helicopters branding.
2016 Heli-Expo showcases the longtime partnering of Brainerd Helicopters Inc. and Brown Helicopter, exemplified in the BHI² Helicopters branding.
BHI² has fielded the most FAA Type Certificated UH-60’s, sold through the first and very successful commercial aftermarket UH-60 Type Certification and conversion program.
The aircraft on display is a specially-equipped research and development platform to support Flight Test Programs.
Newly unveiled features include a pair of Robertson Fuel Systems (a Heico Company) Conformal Auxiliary Fuel System (CAFS) as the aircraft serves as test bed for obtaining FAA STC certification, with tank certification anticipated by the end of 2016.
This specially modified aircraft also features a United Test Systems data acquisition unit to gather accurate airspeed, flight control positions, airframe stresses and other related flight test parameters.
In 2015, the Federal Aviation Administration (FAA) issued a groundbreaking restricted-category type certification to BHI² Helicopters, allowing commercial operation of Sikorsky UH-60A helicopters for variety of missions.
The company was first to obtain this privately-held, non-OEM FAA Type Certificate for the platform and also first to deliver aircraft under this certification approach.
BHI² Helicopters operates or has available for acquisition over 40 UH-60/S-70 aircraft in total.
News from the Web