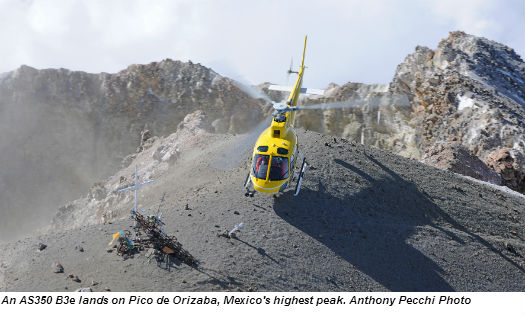 An Airbus Helicopters AS350 B3e helicopter achieved a new record in Mexican aviation history last week by landing on the country’s highest peak, the 5,610-meter-high Pico de Orizaba (also known as Citlaltépetl).
The historic landing―coordinated with the Mexican Civil Aviation Authority (DGAC) and undertaken in accordance with international operating standards―underscores the extraordinary power and reliability of an aircraft capable of operating at extreme altitudes and temperatures. This is the same model that set a new world record in 2005 by landing and taking off from the summit of Mount Everest.
The two men at the controls of the aircraft were flight captain José Luis Zamora Rodríguez and flight engineer Erick Pérez Velázquez, both of whom work for the European manufacturer, which has been present in Mexico for more than 30 years.
“It is very satisfying to see the AS350 B3e adapt perfectly to the diverse operating conditions of the Mexican terrain,” said Serge Durand, the CEO of Airbus Helicopters’ local subsidiary. “Thanks to this and its versatility, we are confident the aircraft will be deployed in all types of missions, both in the civil and governmental realm. It is our wish to continue investing in the Mexican aviation industry and promoting, in the medium term, the manufacture of “Made in Mexico” helicopters that comply with international standards.”
Airbus Helicopters employs around 300 people at its facilities in Mexico City, Veracruz and Querétaro, where a high-technology plant manufacturing aircraft components was opened last year in the presence of Mexican President Enrique Peña Nieto.
There are 500 Airbus Helicopters aircraft providing services in the region under the responsibility of the Mexican subsidiary. The fleet includes the Ecureuil AS350 B3, used in public services, private transport and utility aerial work; the EC145, operating in the oil & gas industry; the Dauphin family of helicopters, dedicated to private transport and operations in the oil & gas industry; and the EC725/EC225, used by the Mexican Air Force, Navy and other government forces.
Click here to watch a video of the historic flight.
News from the Web