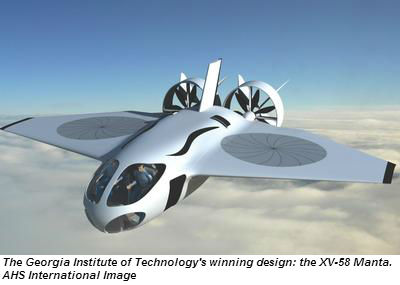 The AHS International has announces the winners of the 31st Student Design Competition: St. Louis University came in first in the undergraduate category and Georgia Institute of Technology won first place in the graduate category. In addition, the award sponsor, AgustaWestland, has increased the total prize money nearly three times – from $3,500 to $10,000 – plus $2,000 in travel stipends.
A total of 11 undergraduate teams from around the world submitted entries in this year’s competition.  St. Louis’s Heli-Fast winning undergraduate design is an unmanned flying wing aircraft with an embedded fan and tilting wing-tip fans. The winning undergraduate teams are as follows:
Place – University (Undergrad) – Design Team
Georgia Tech’s winning graduate design, the XV-58 Manta, is a manned fan-in-wing design shaped like a manta ray, with two fixed pusher props in the rear. Seven graduate teams submitted proposals; the winning teams for the graduate category are as follows:
Place – University (Graduate) – Design Team
In addition, St. Louis University was recognized as the undergraduate winner of the Best New Entrant award, and Politecnico di Milano as Best New Entrant for the graduate category.
As the 2014 Student Design Competition sponsor, AgustaWestland increased the prize amount in order to demonstrate its commitment to encouraging the next generation of engineers to pursue careers in rotorcraft. AgustaWestland, in partnership with AHS International, aims to encourage more universities from around the world to take part in this exciting endeavor and attract the best and brightest engineering students to the rotorcraft industry.
“We are very grateful that AgustaWestland decided to make such a significant increase in support to the competition, allowing us to increase both the number and the amount of the awards,” commented AHS International executive director Michael J. Hirschberg. “This was one of our most exciting design competitions to date. It attracted 28 teams, including schools from Canada, India, Italy, Mexico, the U.S. and the U.K. We hope that the publicity generated from these awards will encourage even more schools to compete in the future.”
The design competition rotates between AgustaWestland, Airbus Helicopters, The Boeing Company, Bell Helicopter Textron, and Sikorsky Aircraft Corp. The U.S. Army has now also joined in the rotation, and will be the sponsor of the 32nd Annual AHS International Student Design Competition.
The AHS Student Design Competition, which challenges students to design a vertical lift aircraft that meets specified requirements, provides a practical exercise for engineering students at colleges and universities around the world and promotes student interest in vertical flight technology. Each of the winning teams is awarded a cash stipend, while two members of each of the first-place winning teams are invited to AHS International’s 71st Annual Forum and Technology Display – to be held May 5-7, 2015in Virginia Beach, Virginia, USA – to present the details of their designs. Members of the teams receive complimentary registration to the Forum, the vertical flight industry’s principal professional technical event, which promotes vertical flight technology advancement.
The 2014 Student Design Competition challenged students to design an experimental Vertical Take-off and Landing (VTOL) aircraft – an X-VTOL – intended to establish key performance attributes to enable transformational mission capabilities on an objective aircraft. These include efficient sustained hover, long-range cruise, high useful loads and sustained flight at airspeeds between 300 kt and 400 kt (555 –740 km/hr), about three times the maximum speed of today’s helicopters. In support of the Student Design Competition, Advanced Rotorcraft Technology (ART) sponsored the use of its FLIGHTLAB software for this year’s graduate competition so that students could simulate the flight characteristics of their designs.
For those interested in more information about the AHS Student Design Competition please visit our website at www.vtol.org/sdc. The top-winning entries from the 31st Student Design Competition are posted on the site, along with previous winners. This webpage will feature the Request for Proposal for the 2014-2015 AHS Student Design Competition, sponsored by the U.S. Army, when it is released later this month.
News from the Web