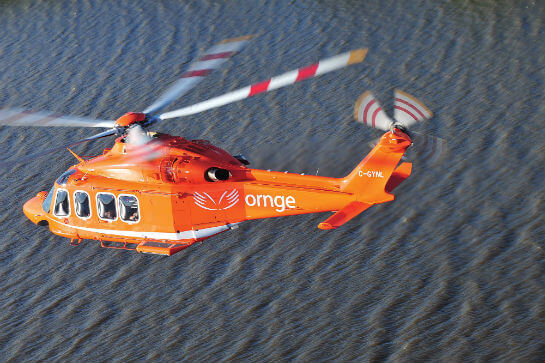 The AW139 will continue to represent the majority of the Ornge rotary-wing fleet. Mike Reyno Photo
Ornge is to stick with its fleet of AgustaWestland AW139s after finding no suitable alternatives following a 10-month request for information (RFI) for possible replacements.
The Ontario air ambulance provider’s fleet of 10 AW139s is only five years old, but with a change in executive and as part of the organization’s three-year strategic plan, it put out an RFI in February 2015 to see whether the AW139 was “the most effective and efficient aircraft” for the role it plays in Ornge’s fleet.
“The RFI was a means of exploring the helicopter market to analyze whether there were alternatives to the current model which could provide the same or enhanced service at a lower cost,” the company said in a statement announcing the end of the RFI process today. “Following a thorough review of the submissions, including operational capabilities, performance, and financial details, it has been determined that Ornge will not be proceeding to a formal request for proposals, and that Ornge will continue to use its owned and operated fleet of AW139 helicopters. The AW139 helicopter is a safe and capable aircraft.”
Dr. Andrew McCallum, Ornge’s president and CEO, said said the genesis of the search was as part of a strategic planning process that began in 2013. “Those were earlier days in our experience with the AW139 — at the time we were having more maintenance challenges,” said McCallum. “We thought it was necessary from a due diligence standpoint just to review the fleet, and that was the purpose.”
McCallum said all the major manufacturers — as well as a couple of leasing companies — responded to the RFI, which called for information on new or used multi-engine instrument flight rules capable rotary-wing aircraft. Likely candidates would have included the Airbus Helicopters H145, the Bell 429, or the MD 902.
Throughout the process, Ornge stressed that the cost of any fleet replacement would have to be “cost neutral” — meaning the financing for the purchase would have to be provided through the sale of the AW139s.
“We would have taken into consideration offsets and operating costs and fuel costs and the like, but at the end of the day we had to operate within the funding that we’re provided by [the Ontario] government,” McCallum told Vertical.
The value of the existing AW139s has also been affected by external influences (particularly in the oil-and-gas market) throughout the last two years, McCallum noted, reducing the potential amount that would be available to fund a new fleet. In spring 2013, Ornge sold two AW139s that were surplus to requirements for $10 million each. “Now if you look at the price of AW139s, they’re not $10 million anymore,” he said. “That’s the reality and things changed quite a lot in that regard. So when we started the process we thought they were worth $10 [million]; they’re probably worth less than that now — probably 60 or 70 percent of that.”
A more positive change over the last two years has been the operator’s experience with the aircraft. “As our engineers have become more comfortable with the fleet and the nuances of the aircraft, they’re much better at maintaining it, [and] our supply chain management has improved significantly as well,” said McCallum. “The uptime for the helicopter is in the 92 percent range, on a 24/7 basis, which is pretty impressive.”
Looking ahead, four Ornge pilots have now received their training in the use of night vision goggles (NVGs), and the organization has begun a three-month NVG trial in Sudbury, Ont., using the one aircraft in the organization’s fleet that has been converted to NVG compatibility.
Change is also on the horizon for those in the cabin, with a prototype replacement medical interior being taken to Ornge’s bases for review from the frontline staff. The layout of the aircraft’s original medical interior had prevented paramedics from performing certain procedures effectively; in January 2013, the organization began using an interim solution until a permanent replacement could be developed.
“The interim solution allowed patient care to occur, but [is] not ideal from an ergonomic standpoint for paramedics,” said McCallum. “The prototype deals with those things. . . . There were a lot of changes, and the initial reviews from the paramedics are favorable. We really want them to have a chance to get inside it and move around, get a sense of how the stretcher works and offer suggestions for tweaks and improvements that can occur.”
News from the Web