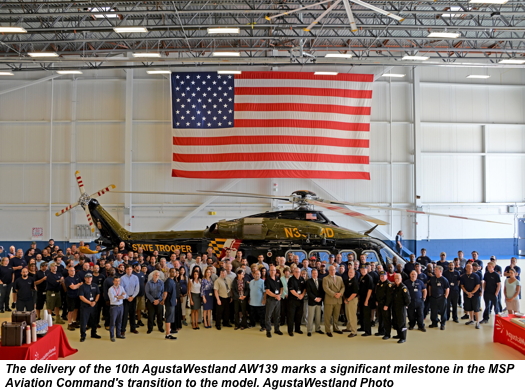 The Maryland State Police (MSP) Aviation Command is nearing completion of its transition to AgustaWestland AW139 helicopters, having recently taken delivery of its 10th and final AW139, and commenced full-service operation of the model at its Washington Section at Andrews Air Force Base.
Manufacturer AgustaWestland announced the delivery of MSP’s 10th AW139 on Tuesday, Aug. 5. The same day, MSP held a ceremony at FedEx Field to mark the entry into service of “Trooper 2,” its AW139 based at Andrews Air Force Base. MSP said that the pilots and flight paramedics who staff Trooper 2 are now fully trained on the new aircraft, and are flying the new helicopter around the clock on all Aviation Command missions assigned to the Washington Section.
The milestone is particularly significant for the Aviation Command because of the crash of a previous Trooper 2 helicopter, a Eurocopter SA365 N1 Dauphin, on Sept. 27, 2008. Pilot Stephen Bunker, flight paramedic Trooper First Class Mickey Lippy, Charles County EMT Tonya Mallard, and patient Ashley Younger died in the crash in Walker Mill Regional Park as the aircraft was attempting to land at Andrews Air Force Base after encountering heavy fog during a medevac. Patient Jordan Wells was critically injured in the crash, but survived.
In its report on the accident, the National Transportation Safety Board (NTSB) identified the probable cause of the crash to be “the pilot’s attempt to regain visual conditions by performing a rapid descent and his failure to arrest the descent at the minimum descent altitude during a nonprecision approach.” The NTSB also identified a number of factors that contributed to the accident, including the pilot’s limited recent instrument flight experience and inadequate assessment of the weather; the lack of adherence to effective risk management procedures by the MSP; and problems with Air Traffic Control.
The Trooper 2 accident played a key role in the decision to upgrade MSP’s fleet to new AW139 helicopters — an expensive and controversial proposition. Speaking at Tuesday’s event at FedEx Field, Maryland Gov. Martin O’Malley said, “What we’re talking about today is our ongoing fulfillment of a promise made to the people of Maryland to continue improving public safety even in the face of some pretty tough economic times. We will continue to make the critical investments necessary to give Maryland’s world renowned, integrated, emergency medical services system the equipment they need to do their jobs and the latest in aviation technology and safety to help save more lives.” 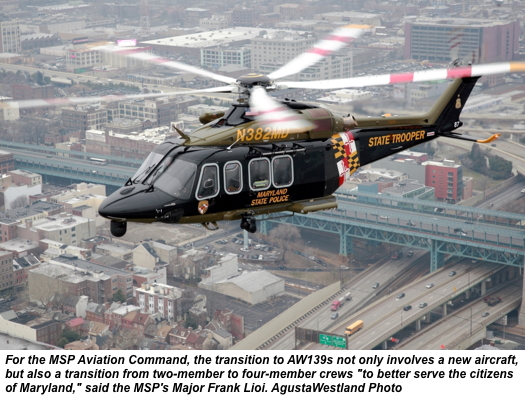 MSP said the new helicopters contain the latest in avionics and safety equipment, including terrain awareness warning systems, night vision compatibility, cockpit voice and video recorders, radar altimeters, and advanced instrument flight rating capabilities. The new helicopters provide more space in the patient and cargo areas, enabling flight paramedics to have better access to patients and to carry rescue equipment on board all the time. They also have satellite tracking and downlink video capabilities, as well as interoperable communication, the agency said.
The significant technology enhancements on the new helicopters have necessitated extensive training for personnel, which is being conducted systematically at each individual Aviation Command section. In addition to pilots learning the new aircraft requirements, the flight paramedics must also become familiar with the new medical equipment and configurations in the aircraft. Thus far, crews have been fully trained and new helicopters deployed at the Frederick, Easton, Salisbury, Southern Maryland, and Washington sections. Training is now being conducted with the crews of Trooper 5 at the Cumberland Section, in Allegany County.
The final section to be trained will be the Baltimore Section, where training is expected to be conducted later this year. This will complete the transition to the new AW139 helicopter fleet ahead of schedule, according to MSP.
AgustaWestland said that all 10 of the aircraft ordered have been fully built and delivered from the company’s Philadelphia, Pa., assembly line, with continued technical support provided by the Philadelphia-based Customer Support and Training team.
News from the Web