More than 40 privately-owned helicopters and 107 participants touched down on the grass runway of St-Jovite Airport in the mountain resort town of Mount Tremblant, Quebec, for the annual HeliClub fly-in, held May 25 to 26.

The weather forecast called for rain and thunderstorms, but it was sunny most of the two days, allowing owner/pilots and friends to attend safety management and co-pilot courses, fly new helicopter models, conduct a little flight training and socialize.

Airbus brought a twin-engine H135 equipped with Helionix avionics to Canada for the first time to attend the fly-in and also flew an EC120 B and new H130 (EC130 T2).

And Bell flew the prototype 407GXI in from the Mirabel factory and also gave demo flights in a customer-owned Bell 505 and 429.

“Many Quebec operators like to upgrade to a new helicopter every two years,” observed Jean-Charles Emter, president of HeliClub and HelicoStore, a helicopter dealer.

“A lot of people start out with a Robinson R44 and then upgrade to an R66. Some owners are upgrading to the Bell 505 which is a great machine with a very simple start process with a dual channel FADEC, but it costs over $1 million so is attracting a different clientele.”

The first four Bell 505s delivered in Canada went to Quebec customers and another 12 have been ordered by Quebec owner-pilots, with Bell reportedly sold out through March 2019.

One of the secrets to the growth of the private helicopter market in Canada is that HeliClub gives owners plenty of opportunities to have fun with their helicopters with fellow owner-pilots and their friends and families.

Every year, HeliClub organizers have added something new to the fly-in program to keep owner-pilots challenged and entertained.

The highlight this year was a precision flying competition designed to develop a Canadian team to compete in the World Helicopter Championships in which teams from 12 different nations currently participate.

“During a trip to Russia, we met the Russian helicopter team and we decided to create our own team in Quebec,” said Emter.

Seven teams participated in the fly-in competition this year, primarily flying Robinson R44s and an R66.

“Each pilot was accompanied by an instructor as they competed in five different precision flying activities and five teams completed all activities,” explained Emter.

The other three activities required good crew co-ordination and included the pilot helping the crewman accurately fly a buoy attached to a five-meter rope through a slalom course on the ground; using a rope to lift a bucket full of water and transporting it to another container without spilling; and accurately dropping three small balls from a high hover into a small container.

While the tasks appeared to be simple, most proved a challenge to the teams. The activities were timed and scored by two officials on the ground. The winning team earned 29 points, with the pilot accompanied by an instructor from Helicraft.

Members of the newly-formed team hope to represent Canada at the World Helicopter Championships in Minsk, Belarus, this coming July 23 to 29.

At other times of the year, HeliClub members fly in smaller groups to special events in Quebec, and a partnership with Helimob includes opportunities to travel by self-piloted helicopter in other scenic areas of the world, including the Rocky Mountains in Canada, California, and even Russia.

Volunteer support at this year’s HeliClub event was provided by student pilots from Helicraft and Passport Helicopters, two major helicopter operators in the Montreal area. Most of the students come from France or Switzerland, finding Quebec an affordable place to flight train, wanted instruction geared to utility operations and welcomed the opportunity take their flight training in French.

Bell also used the occasion to bring some of aircraft delivery and customer support staff from the Mirabel factory out in the field to a fun event full of helicopter enthusiasts. 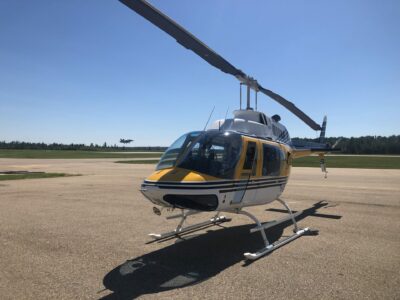 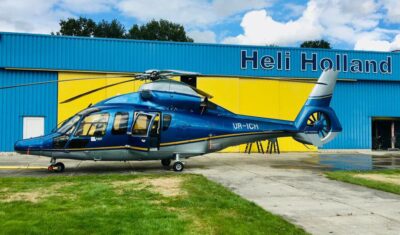 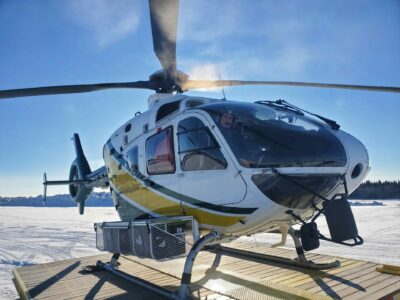